The Qazaq Green Association organised a two-day expedition to Buiratau Nature Park with 50 representatives of state and private companies and experts to discuss important issues in the renewable energy sector in Kazakhstan. 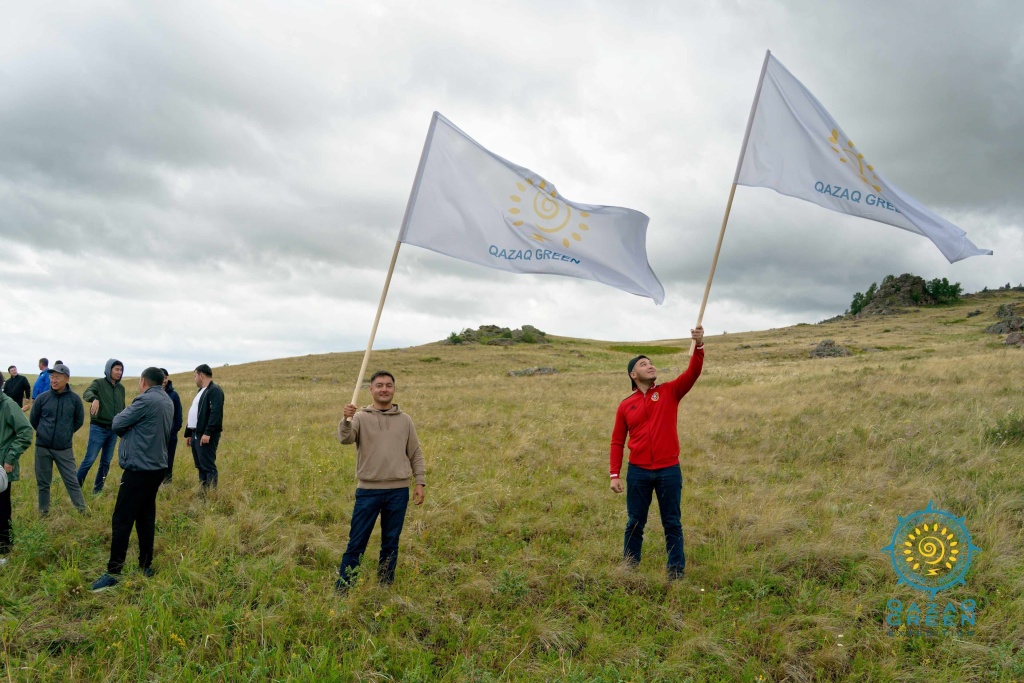 Renewable energies are no longer the future, it’s the present

The purpose of the expedition focused on exchanging views on the problems in the sector and discussing opportunities to give renewable energy sources a new impetus.

The expedition began with a visit to two renewable energy sites in the Akmola region - the Astana Expo 2017 wind farms and the First Wind Power Plant. 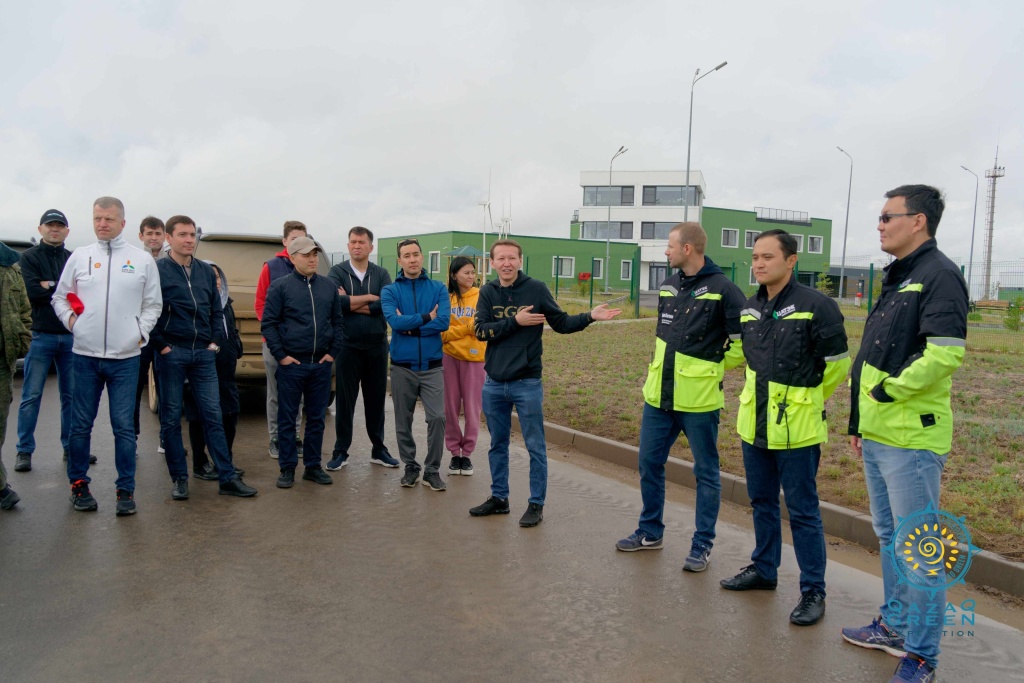 The first one is located very close to the capital. It was built by CAPEC Green Energy, a subsidiary of the CAEPCO, a vertically integrated power utility holding company in Kazakhstan. The first stage was launched in 2017, the second stage in 2020, and the total capacity of the plant is now 100 megawatts.

The project cost 45.1bn KZT, including 30.5bn borrowed by the Development Bank of Kazakhstan and its subsidiaries.

We have 29 wind turbines manufactured by VESTAS, one of the world's leaders in green energy technology.

The project was ambitious. For example, the turbines travelled 5,000 kilometres with shipping before being installed outside the capital. It required a 700-tonne crane to install the wind turbine tower, which was brought in parts by 40 trucks. Each tower is 64 metres high, and the diameter of the circumference formed by the ends of the blades is 100 metres. In other words, the maximum height of each wind turbine is more than 100 metres.

One generator has a capacity of 3.45 megawatts. The management is very technologically advanced: wind speed and power generation can be monitored in real-time from the control centre, and the status of any node can be monitored.

The turbines are automatically regulated, and if wind speeds exceed 25 metres per second, they are stopped so that the equipment does not wear out.

The participants in the Qazaq Green expedition visited one more RES facility – the First Wind Power Plant. It is also contributing to the development of green energy in Kazakhstan. 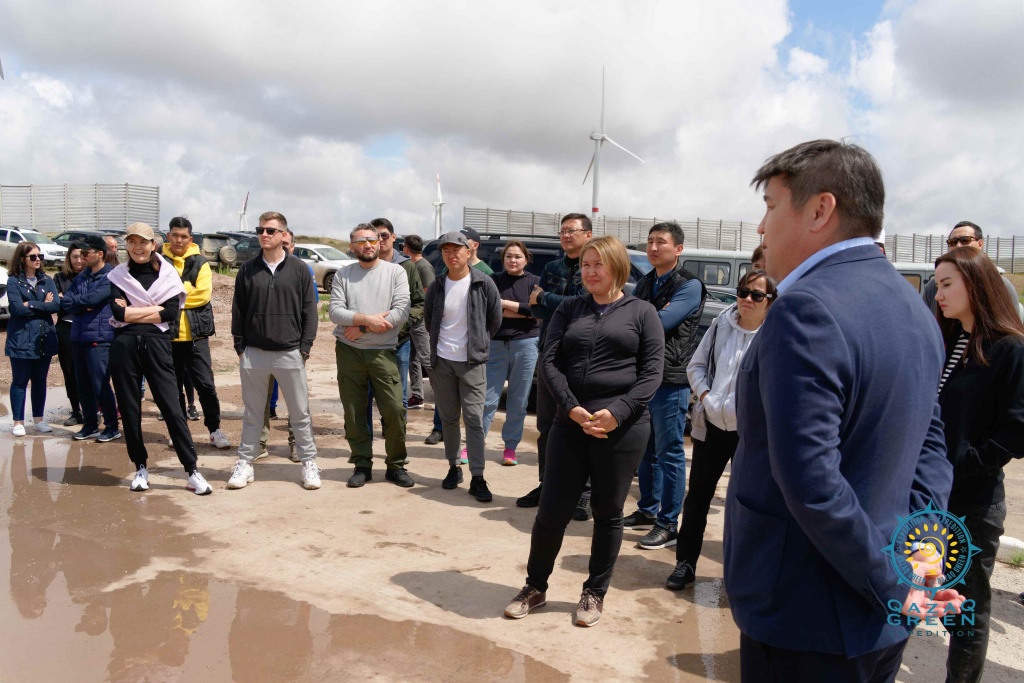 This wind farm, located near Ereymentau, has an installed capacity of 45 megawatts, which is generated by 22 units of two megawatts each.

Here the wind turbines are slightly higher: the tower is 85 meters high and the blades are 93 meters. 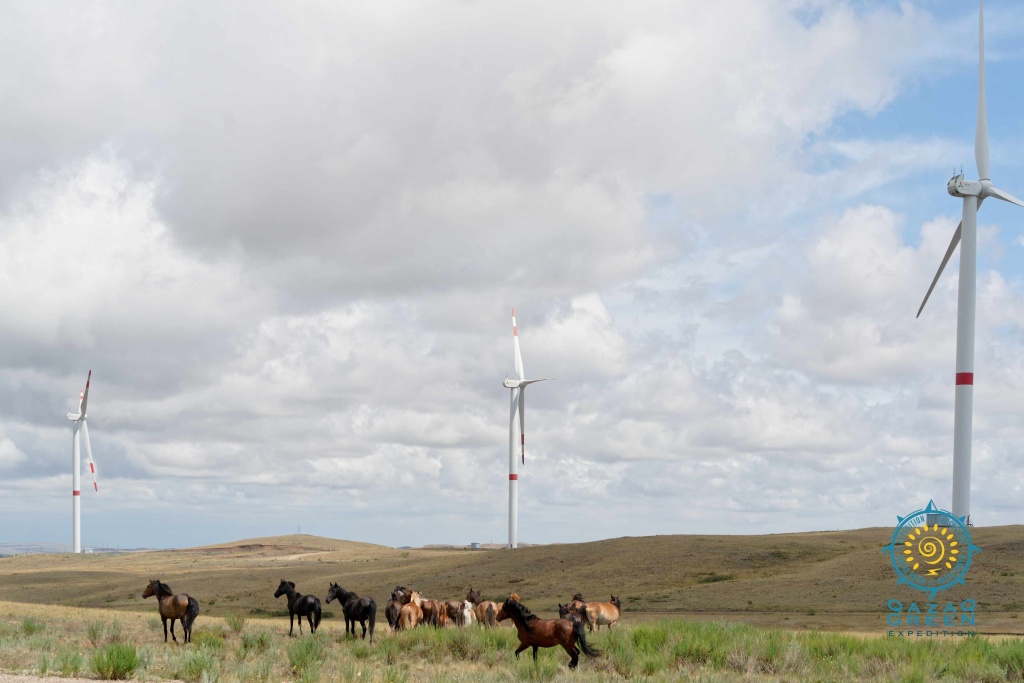 Dozens of cars drive slowly along a steppe road. Ereymentau, a small town in the Akmola region, was left behind and the scenery of the Buiratau Nature Park opened up before the caravan of cars. 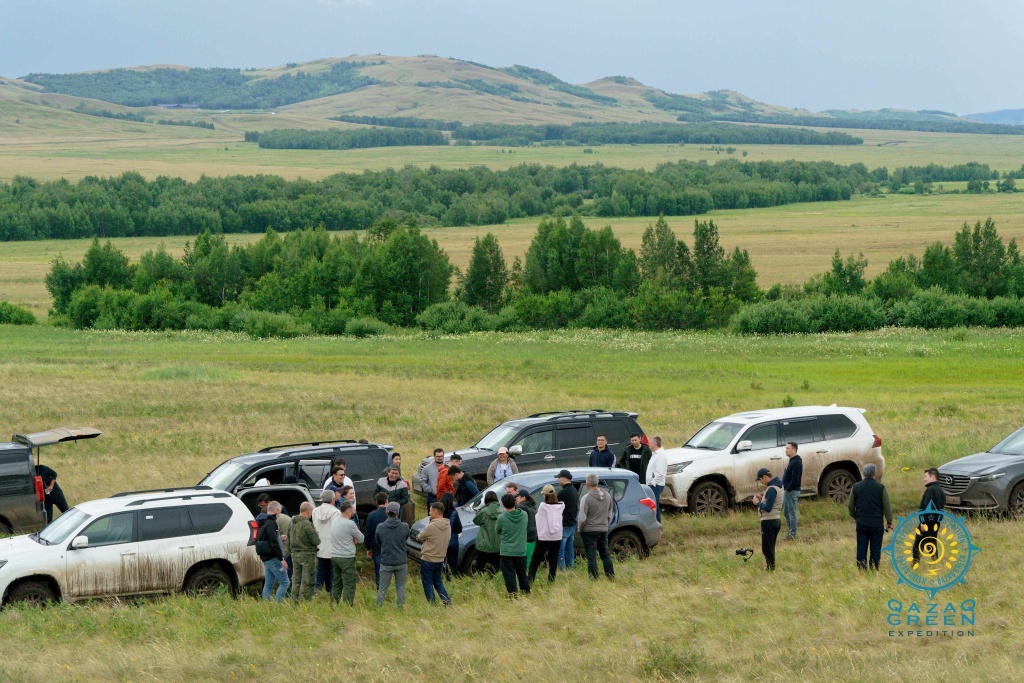 The route is short, according to the map, from the wind farm to the Buiratau Nature Park, several tens of kilometres along a steppe dirt road. 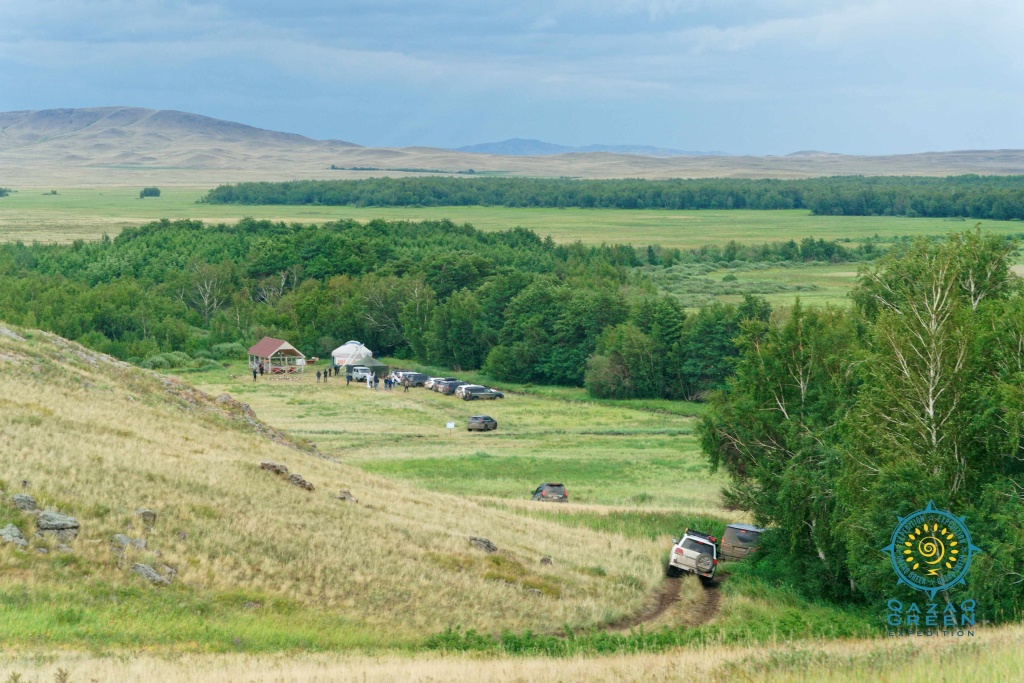 Normally it does not take more than an hour, but after heavy rains the ground became muddy, and a column of two dozen cars stretched ng a narrow road.

Instead of the usual picture of monotonous steppes that Kazakhs are used to seeing outside megacities, there are hills and mountains, small islands of forests and abrupt changes in altitude. But this time travellers were not entirely lucky. After heavy rains the ground became slack, and even four-wheel drive cross-country vehicles did not find it easy to drive over low-lying areas with accumulated water.

Fortunately, almost all of them were off-road vehicles that could traverse water-filled depressions and deep ruts.

Even when some had trouble getting over obstacles, the other members of the expedition were quick to help get the stranded vehicles out.

However, all these problems and occasional rain showers from the sky compensated for the views of the Buiratau Park. After arriving at the assembly point, the expedition members got down to the main thing - a discussion of the situation in the renewable energy sector. 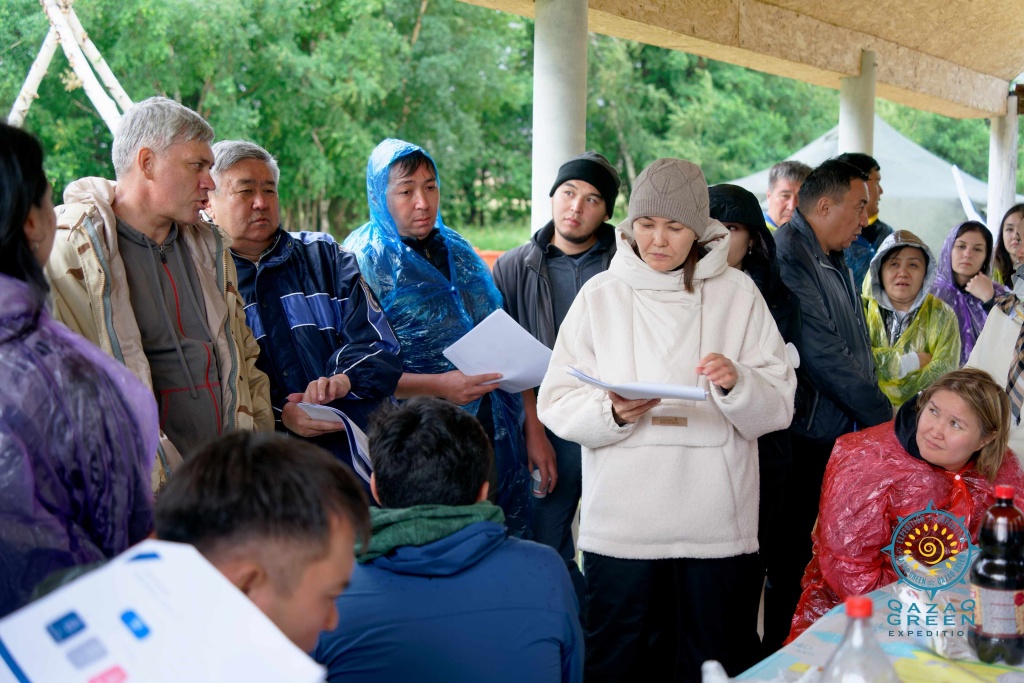 Market participants are convinced that in order to stimulate the development of renewable energy sources we need to improve energy trading mechanisms in the market. This was the main topic of discussion "Prospects and problems of RES projects implementation under bilateral contracts".

Both RES facilities and green energy consumers need clear game rules to predict their economy. For example, it is important for exporters to understand exactly how much clean energy they buy to reduce their carbon footprint and, therefore, avoid overpaying taxes abroad in countries with strict carbon regulations. This is particularly the case, for example, with the forthcoming introduction of a carbon tax in the European Union.

Both the future of this energy sector and the export potential of Kazakhstan depend on the regulation of renewable energy sources. 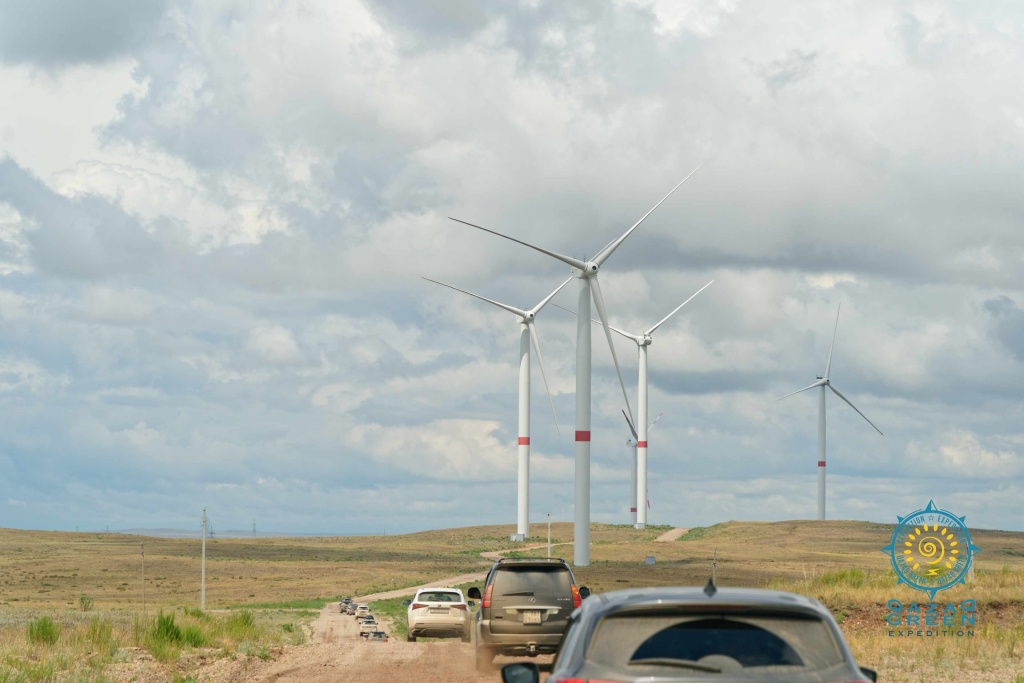 Why does Kazakhstan need it?

Despite the availability of large reserves of coal, cheap raw material for electricity generation, Kazakhstan has set itself the ambitious goal of significantly increasing the share of renewable energy in its energy system.

Thus, the Concept for the Transition to a Green Economy (set out in 2013) defines specific indicators to be achieved by the energy sector on its way to reducing its environmental impact. By 2020, the share of renewables in total electricity production was to reach 3%, by 2030 - 15%, and by 2050 - half of all electricity production, albeit together with alternative sources.

By the way, the 2020 target has already been achieved:

in 2021, the total installed capacity of renewable energy power plants in Kazakhstan exceeded 2 gigawatts, and the share of RES in electricity production across the country reached 3.6%.

The development of renewable energy is a necessity for Kazakhstan today, economist Olzhas Khudaibergenov said. There are several main reasons for this.

First of all, in 2025, a European Union regulation will come into force, which implies the introduction of a cross-border carbon regulatory mechanism, i.e. a carbon tax on imports. 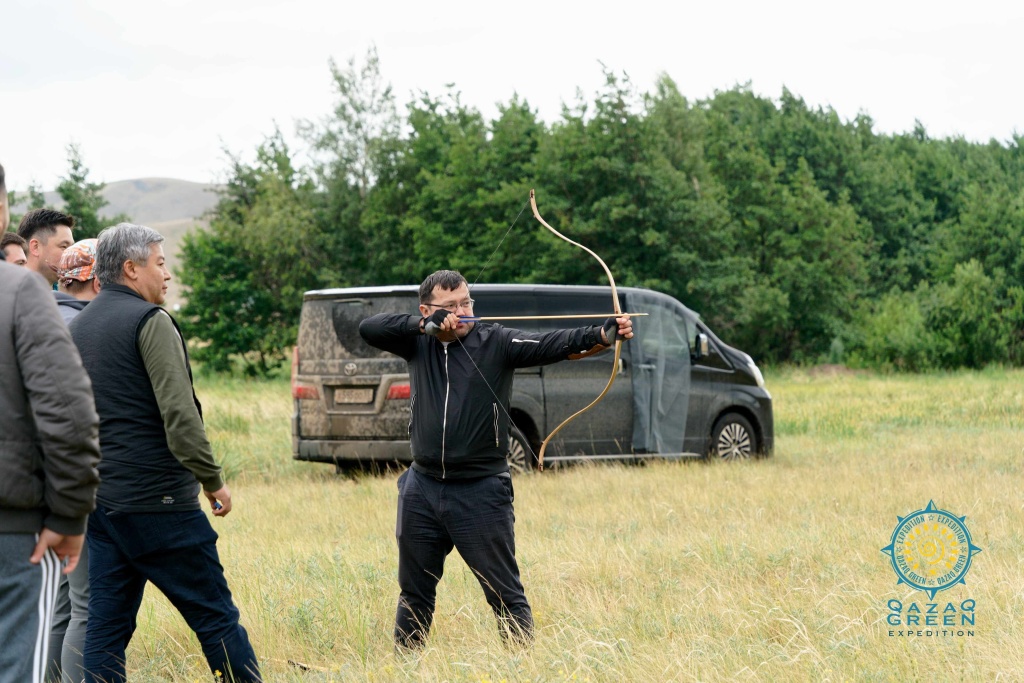 "This implies some transformation of our economy and the energy sector, including increasing the share of renewable sources," Olzhas Khudaibergenov said.

The second reason is that Kazakhstan still has an energy deficit, and the new RES

facilities will help overcome it. At the same time, such power plants will meet the growing demand for electricity from the economy and the population, rather than replace the existing coal-fired generation facilities.

The main goal of this work is to make Kazakhstan's economy greener and therefore more environmentally sustainable. Dialogue platforms like the Qazaq Green Expedition help to create a common understanding of the problems in the sector, thereby accelerating their resolution.

Nurlan Kapenov, Chairman of the Board of Directors of the Qazaq Green Association, explains that such events are necessary for networking among energy industry participants.

"In general, the development of RES in Kazakhstan is currently on hold. There are contradictions: the Kazakh President talks about the need to achieve carbon neutrality by 2060, and the Ministry of Energy is developing a forecasting balance, stating the introduction of six gigawatts of RES capacity and two gigawatts in hydroelectric power until 2035. On the one hand, it says so, but on the other hand, over the past two years, KEGOC has not issued technical specifications for RES facilities, except for those that have passed through auctions," said Nurlan Kapenov.

According to him, Kazakhstan currently lacks a unified strategic document that would form the basis of an understanding of the development of the electricity market, including renewables, in economic terms, with calculated mathematical models, he said. As in the government, there is also a misunderstanding within the industry of its development prospects.

"Market players hope the market will develop. We say, 'No, it will not develop' with the current state of affairs. That's why we organised the expedition to bring market players together. Everyone understands that the industry needs transformation. We wanted to unite the market to make a collaborative, professional networking," Nurlan Kapenov said.

According to Qazaq Green's Chairman, the expedition was one of the first steps in uniting the industry and organising work to develop common approaches to its development. 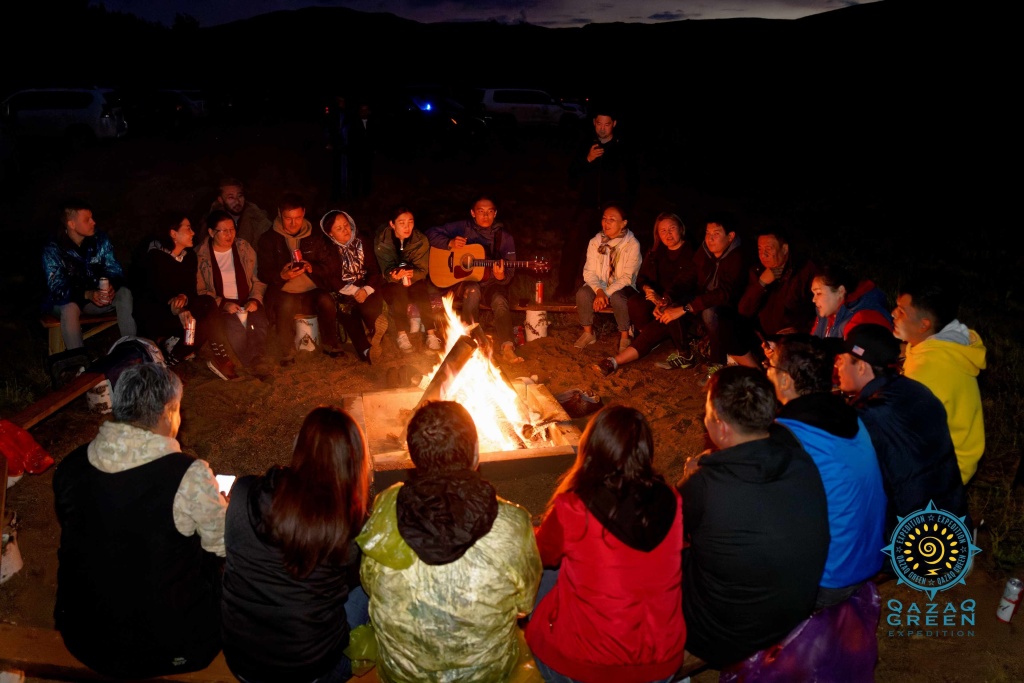 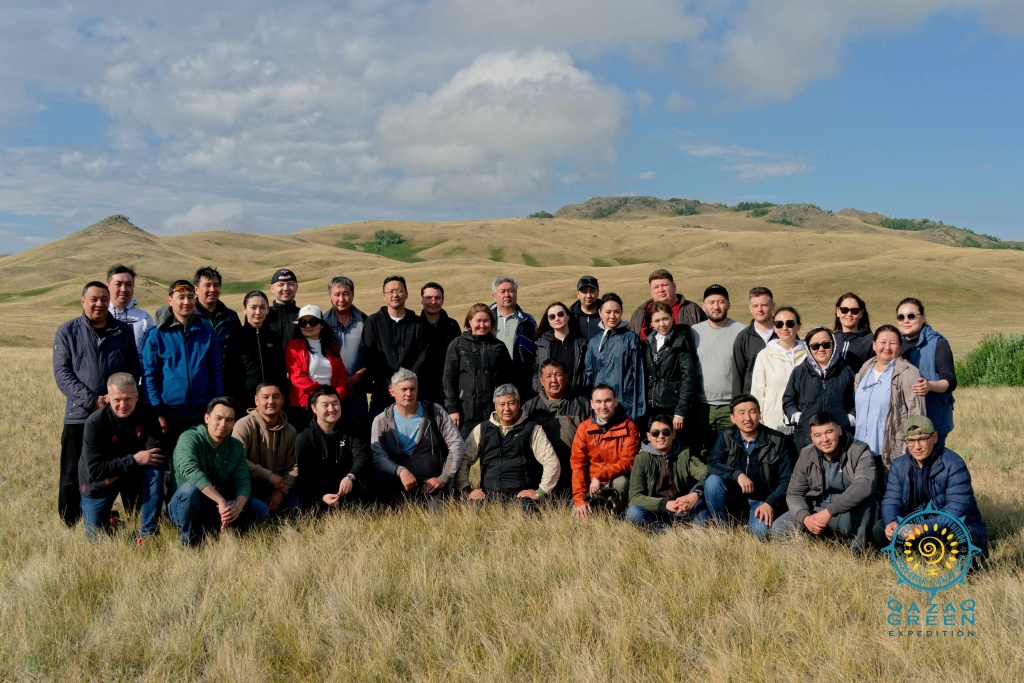 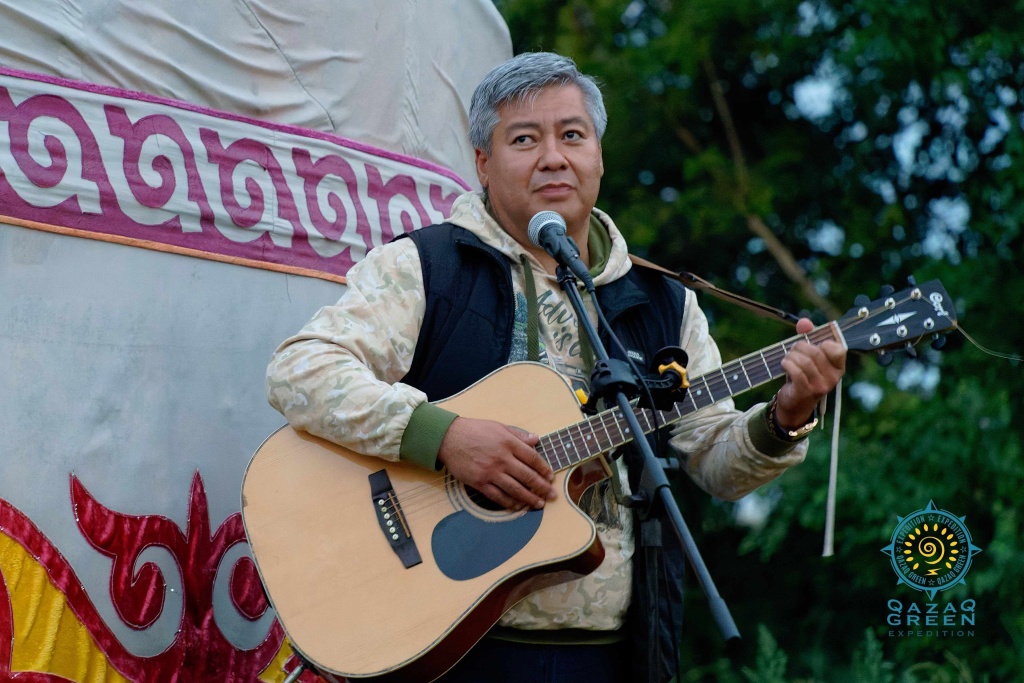